JESPER SEHESTED’S LIFE AS A DYSLEXIC

Jesper’s mother and grandparents are all dyslexic, so his mother thought that Jesper’s difficulties with speech were perhaps an expression of his inheritance of the same challenges.

Since Jesper had no control over sounds of letters, he was put in a special kindergarten. Here he was grouped with five others who had similar speech problems and same temperament. 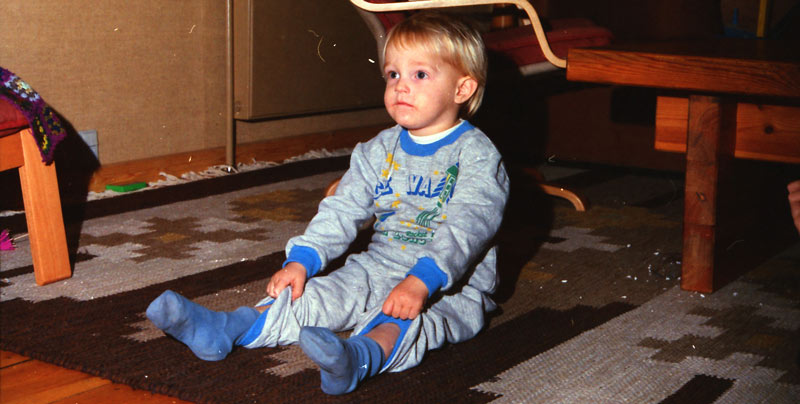 During that period, Jesper was a happy boy, he was like the other five. Unfortunately, it changed when he moved on to elementary school.

Jesper quickly realized that he was not able to do the same as all the other children. The letters and the words teased. It did not get any easier, the older he got, and at the same time the demands grew.

Therefore, no one had great expectations for Jesper’s future studies. Instead, it was expected that he would be creative and use his hands.

But what does it mean to be creative? He did not know.

In Jesper’s world, creativity was something with drawings and graphics. That idea did not make everyday life easier when he looked at his paper and his creativity looked like this.

During Jesper’s first school years, the day he looked the most forward to was the last school day of 9th grade. This left many years to experience countless failures.

However, Jesper found a way to avoid some of the challenges. Trouble making and playing the class clown. It was his way of moving focus away from the dyslexia and ensuring that classmates did not discover it.

In the 9th grade, when writing, there was no smiling Jesper. In his dictation he got 71 out of 92 possible errors. Failed! 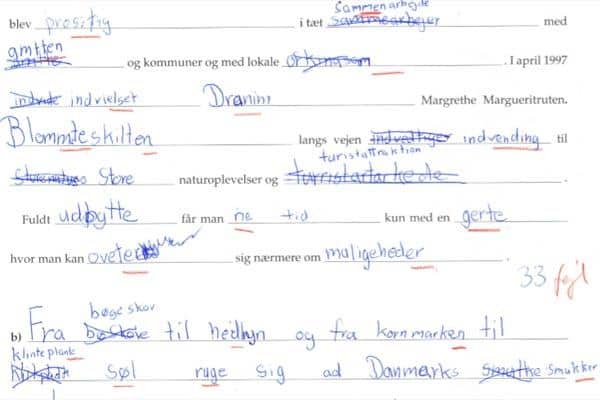 JESPER CLIMBED THE MOUNTAIN OF LETTERS

Jesper did not have much positive energy and would often think about the future after school. He went to the 10th grade, to have more time to figure out his way into further education.

That year everything changed.

And it was not because Jesper found exactly what he wanted from the future. However, he climbed the Mountain of Letters. He realized that he was “just” dyslexic.

In fact, it was not the dyslexia that limited him to achieving his dreams for the future. But it was the story he told himself and others about himself and what he could do. Namely, that he could not do anything because he was dyslexic.

In the 10th grade, Jesper created a new story about himself with the help of his girlfriend, Thea. The dyslexia was no longer hidden away. That openness meant that Jesper was not afraid to ask for help with reading and spelling.

A JOURNEY TOWARDS EDUCATION

The new story began a journey towards education. The first step was to find out which one.

Jesper went to high school. It was another good year of education. Something he did not believe could be true back when he attended primary school.

It was expected that he would go the creative way. The next step was therefore to apply as a media graphic artist.

It was not long before Jesper discovered that his creativity was not in the graphic field.

But his choice still enabled the belief in something more.

During his studies as a media graphic he had to write a five-page paper on how a computer worked. He knew all about that, but spelling was a big challenge.

Jesper chose to lay the cards on the table and tell the teacher about his challenges. The teacher saw no problems and offered him to proofread the paper for him. Jesper did not think twice about that offer.

After handing in the assignment along with his classmates, he was given a seven (Grade B).

This experience of success created the belief that studies could be a way forward.

Soon after Jesper enrolled at HTX (Higher Technical Examination at high school level) faithful that it could be done by being open about his dyslexia.

It was three hard but also educational years.

After HTX, Jesper had a new energy. He wanted to show all those who had not believed that academic education would be possible for him, that he could do well. Unfortunately, he chose an education according to his grades and not his interests.

That cost him a year. On the other hand, Jesper came out better prepared for further education. He found that his learning style was based on listening. It was therefore crucial for Jesper to attend all the lectures. He did not want to end up with large, thick books that had to be crammed alone at home.

The following year, Jesper chose a new education according to his interests. Here, he also learned that his notation technique needed to be refined so that it suited his learning style. For the lectures, the computer was pushed aside, and the focus moved to listening to the teachers and using their power points as notes. Jesper thus moved his focus to creating knowledge – not notation.

During his studies, Jesper was given the opportunity to travel and study abroad. It had always been a dream for Jesper to try to live in another country. First, he had to pass an English language test, TOEFL. After much practice and four trials, Jesper scored 580 points. That was exactly what was required to attend schools in the United States.

At Boston College, Jesper’s openness about the dyslexia provided the support and help needed to study in English.

The USA was a great experience and it spurred Jesper to try to study abroad once again. This time it had to be more challenging, so Jesper chose to go to China.

What was the worst thing that could happen?

It was a whole new world, that Jesper had never visited or known much about. Here, Jesper again felt very different, but this time it was not the dyslexia. Instead, it was Jesper’s height of two meters (6.5 feet), which generated a great deal of attention as he walked around Shanghai.

The dyslexia did not create any challenges because Jesper was open about it.

It was common to all the foreign students that they experienced challenges in everyday life with the Chinese words and characters. Jesper had experienced such challenges all his life. So, he could continue to use creative “solutions” to pass without much focus on the words.

Jesper’s education had never been a breeze, but a course he wanted to pass. Today, Jesper knows that his dyslexia does not limit him when he is passionate about something and speaks openly about being dyslexic.

CREATED HIS OWN BUSINESS

After his studies, Jesper started some entrepreneurial projects. Some of them quickly fell through, but one of them did not. And Jesper has now worked with “A Life As A Dyslexic” for over five years.

Today, Jesper works full-time in his business helping young dyslexics create new stories about their dyslexia and to climb the Mountain of Letters.

It is a meaningful job where Jesper has the opportunity to develop “A Life As A Dyslexic” with a focus on openness and understanding.

To spread his messages, Jesper has learned a lot of skills in a brand new online world with SEO, WordPress, online marketing and especially written communication.

Along with the development of “A Life As A Dyslexic”, Jesper also wrote a whole new story about himself.

By launching the project “A Life As A Dyslexic” – filled with many words and letters – Jesper trained his writing skills. With the help of his aids, Jesper realized that “I don’t spell so well, but that doesn’t mean that I can’t write and tell stories”.

It gave him the courage to tell a story about how you come to realize that dyslexia should not limit you. It became his first book “Michael and the Letter Mountain” where the ‘Letter Mountain’ is the symbol of the mountain of letters which Jesper climbed himself in 10th grade. 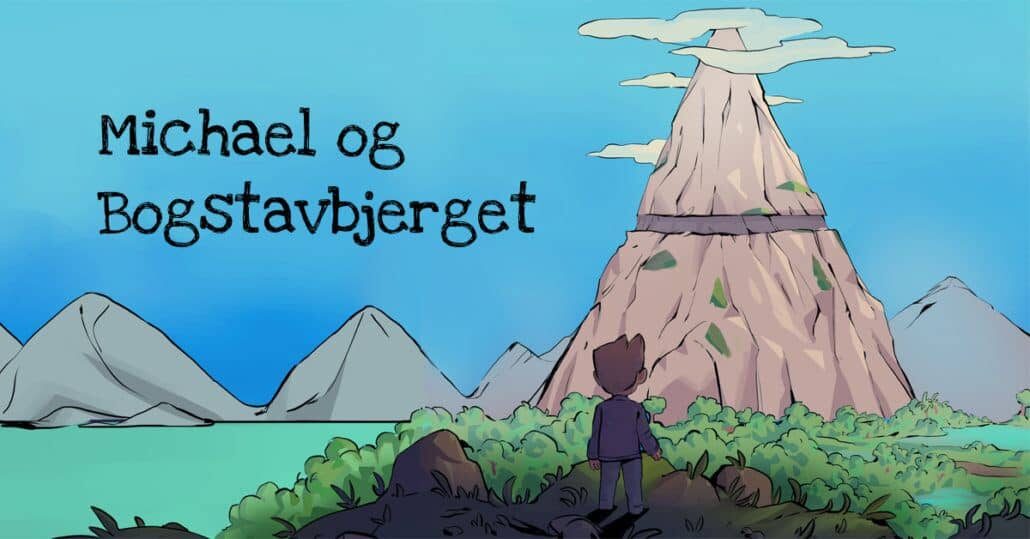 In the book, there are ongoing relevant questions about the story of Michael and his life as a dyslexic. The questions generate a conversation between children and adults about struggling and not being limited by dyslexia.

“Michael and the Letter Mountain” have received many good reviews and feedback from parents who have read the book with their children.

“Your book has really made a big difference, my 10-year-old was just so happy and relieved that for once he didn’t feel alone and wrong, I was literally in tears when he told me: ‘Mom,

That’s exactly how I feel!’

It also made him understand that he is completely without guilt, he is just born with it… And at the same time, it gave him the courage to go on despite the challenges!”

The success of ‘Michael and the Letter Mountain’ created the courage to write another book. Therefore, Jesper began to write the book ‘A Life As A Dyslexic In The Primary School’. This time, it was aimed at teachers and parents to give them a better insight into the world of a dyslexic and thoughts about experiences in the primary school.

“It can be difficult for a teacher to understand what it means to be dyslexic.

The book is ideal for stoking reflection on practice. How can education be organized so that the dyslexic pupils are included, and how do you improve the mindset of the students and classes?”

In relation to his project ‘A Life As A Dyslexic’, Jesper also gives talks at schools, libraries and for Global Dignity Denmark. Today, over 6,000 people have heard his talk “From 71 errors in dictation to education… and now author” about the life as a dyslexic.

Jesper has the ability, from the very first moment, to catch and entertain his audience with his personal history. Jesper’s talk were powerful, very entertaining and had a positive and optimistic approach to life.

There are already many ideas drafted on Jesper’s desk. Ideas for, among other things, several books that will help dyslexics overcome dyslexic limitations.

In the work to help dyslexics, Jesper also makes other products that include: T-shirts and posters as part of a unified universe for dyslexic children and their parents.

The universe is expanded with Pluslexia.com, which is an online international platform where dyslexics can tell their stories of overcoming their limits.